As one of the major indicators for the valuation of public chains, Total Value Locked (TVL) measures the level of prosperity and the fundamentals of a public chain’s ecosystem, especially for public chains with extensive applications on DeFi. During the short bull market that has just ended, native public chain tokens differed from one another in terms of their performance in the secondary market. Even for public chains with moderate performance like BSC, the TVL rebounded after the May 19 crash. However, their token prices have been lower than those of other public chains (e.g. Solana) because the way TVL is calculated does not correctly reflect the actual TVL and capital flows.

In fact, non-stablecoins constitute a significant proportion of TVL, and the prices of many non-stable assets are subject to market swings. This has led to a flawed evaluation method of “price analysis based on token prices”, and the right way to calculate the TVL trends should eliminate the impact of token prices movement.

In this article, three TVL adjustment methods that exclude the impact of token prices are introduced. Some interesting analysis using the adjusted TVL is also provided. The data used by the research are the daily TVL statistics of the top 10 public chains (as per DeFiLlama’s TVL ranking) from February 3, 2021, to September 25, 2021, and the closing price of the corresponding tokens.

In terms of the TVL trend, the BSC public chain was clearly hit by the May 19 crash. After around two months of horizontal price movement, its TVL significantly rebounded. As for Solana, the TVL started growing from the early days of July and soared since September. Other public chains, such as Terra and Avalanche, also performed pretty well. However, as mentioned earlier, due to the major fluctuation of token prices and the flaw of normal TVL calculation, the actual TVL concerning the ecosystem of the public chains may not shown properly by the picture. 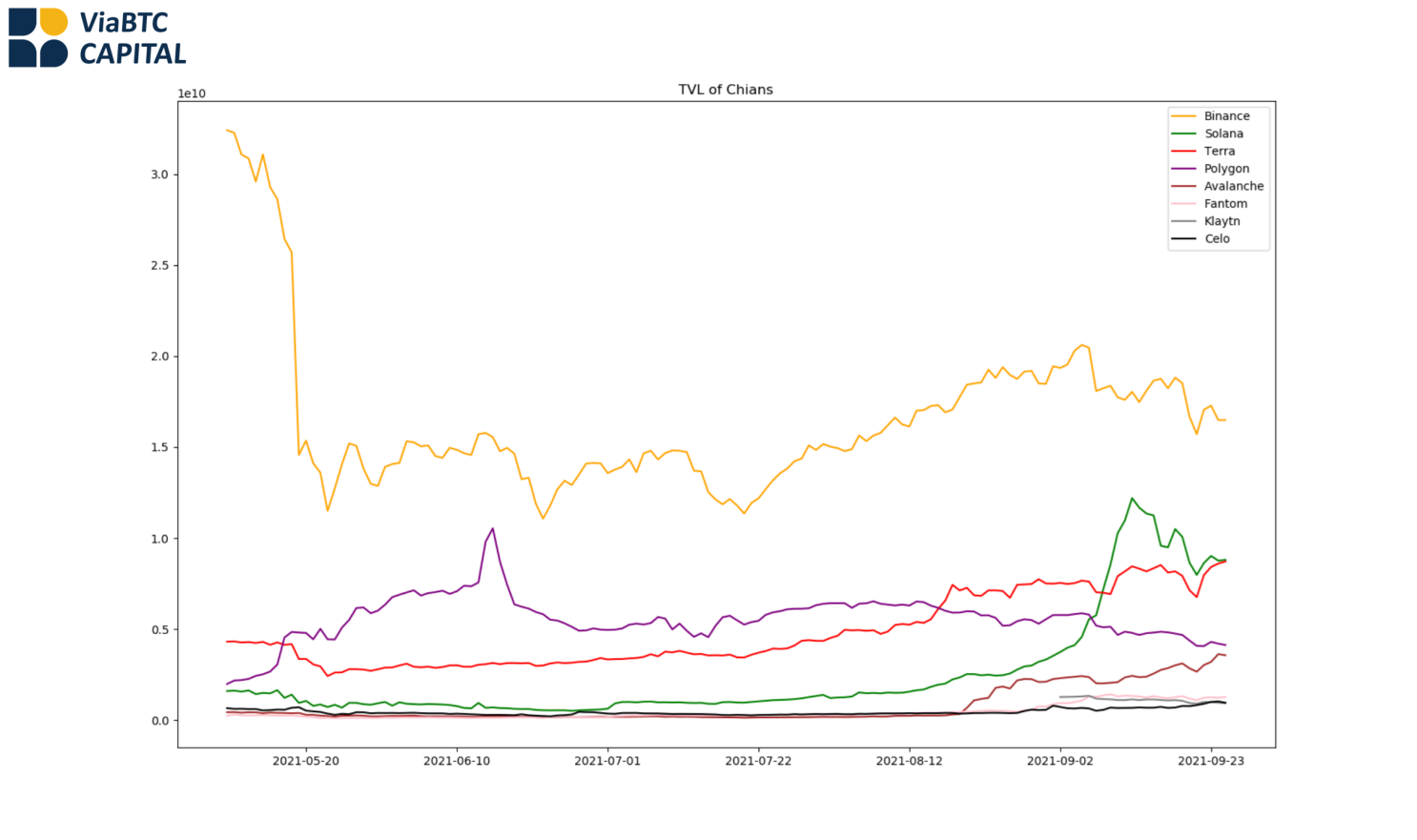 Introduction to Methods of TVL Adjustment

It is very difficult to measure TVL with one numerical value because the tokens locked on a public chain come in a great variety and are subject to rapid updates. The unified measurement based on the USDT-margined value of all tokens is a comparatively more feasible approach. However, since the USDT-margined value also suffers from great volatility, the TVL determined through such an approach may be distorted. One ideal method of adjustment (Method 1) is to establish a Baseline time point and record the price of all the locked tokens at this time point. Whenever the TVL is calculated, the current TVL will be determined by the number of the various tokens in the present network and the Baseline token price, which is expressed in the following formula:

In the above formula,  is the adjusted TVL at the given time t,  is the number of tokens at time t, and is the Baseline token price. Using this adjusted TVL, we can conduct reliable horizontal comparisons between different public chains and reflect on the status of a given public chain. This method has been adopted by DAppRadar for the calculation of the project-specific TVL.

This method is relatively precise and is suited for calculating TVL of a specific project. However, when considering TVL adjustment of an entire public chain, the above method suffers from the unavailability of data and the rapid updates of the locked tokens. For example, the Baseline price records may not include the newly-launched tokens with high TVL. Next, let’s move to another method of TVL adjustment (Method 2). Although this method is less accurate, it features easier data acquisition/processing and can be adopted more extensively. Moreover, using method 2, we can also reasonably adjust most public chains’ TVL.

In the above formula,  is the adjusted TVL at the given time t,  is the regular TVL at time t,  is the Baseline token price,  is the price of the native token at time t, and is the TVL of stablecoins at time T. This adjustment is based on the following reasons:

Method 3, a further simplification of Method 2, is an alternative solution when the TVL value of stablecoins on the public chains is unavailable. The method features the same rationale as Method 2. The difference is that it cannot be applied to public chains with a high TVL of stablecoins, such as Terra and Celo.

Through the TVL trends adjusted using Method 3 as shown in Figure 2, we can tell that the BSC crash may not be as steep as that shown by the regular TVL trend. Furthermore, according to the adjusted values, the sharp and sustained recovery from July to September as per the regular TVL trend did not occur —— What happened was merely an interval oscillation. In the case of Solana, the real TVL did not soar in September. Rather, it had stagnated at the end of August, and the rise of TVL that followed was likely to be caused by the impact of the FOMO price. 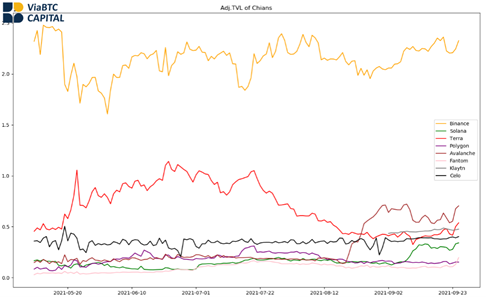 This adjusted TVL also leads to some interesting discoveries. We determined the cumulative volatility of the adjusted TVL and the price of native public chain tokens in relation to three well-established public chains (Ethereum, BSC, and Polygon), i.e. and, with the given time 0 being February 3, 2021. From the results stated in Figure 3, it is clear that the price growth of native public chain tokens and that of the adjusted TVL seem to converge To further verify such a relationship, we can divide the two values of cumulative volatility and see whether there is a mean reversion at around 1. Figure 4 demonstrates that this convergence holds, which means that the valuation method based on the adjusted TVL multiplier (valuation/ the adjusted TVL) is appropriate as Figure 4 shows that this multiplier keeps fluctuating around a certain value. 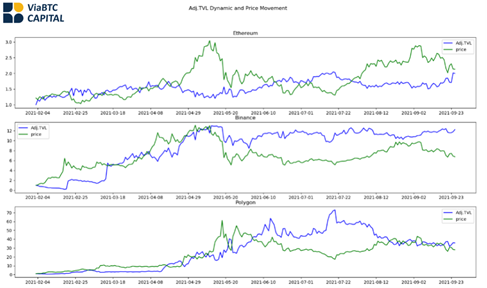 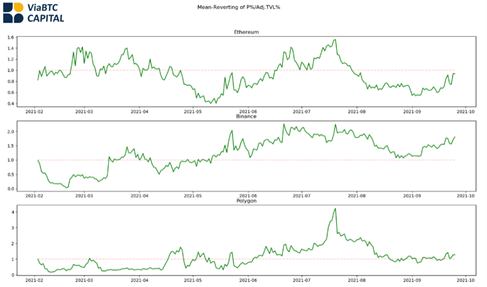 Another case relates to the observation of the actual changes in the TVL of public chains. That is, when a new public chain starts to boom, what is the source of its TVL growth? Does it come from the circulation of existing on-chain capital or new capital inflow? Here, we did some research on Solana. From Figure 2, it is clear that the TVL of Solana’s ecosystem soared approximately from August 12 to September 12. As such, we picked the statistics during this period as the sample for the analysis of correlation and TVL changes. Based on the values of correlation as shown in the black frames of Figure 5, most of the TVL of Solana may have been contributed by Polygon and Ethereum, the latter of which may have provided a greater proportion. The overall TVL (Figure 6) of the 5 public chains dropped from August 12 to September 12, including ETH and BSC, which means that the TVL growth of Solana was the result of capital circulation instead of new capital inflow. 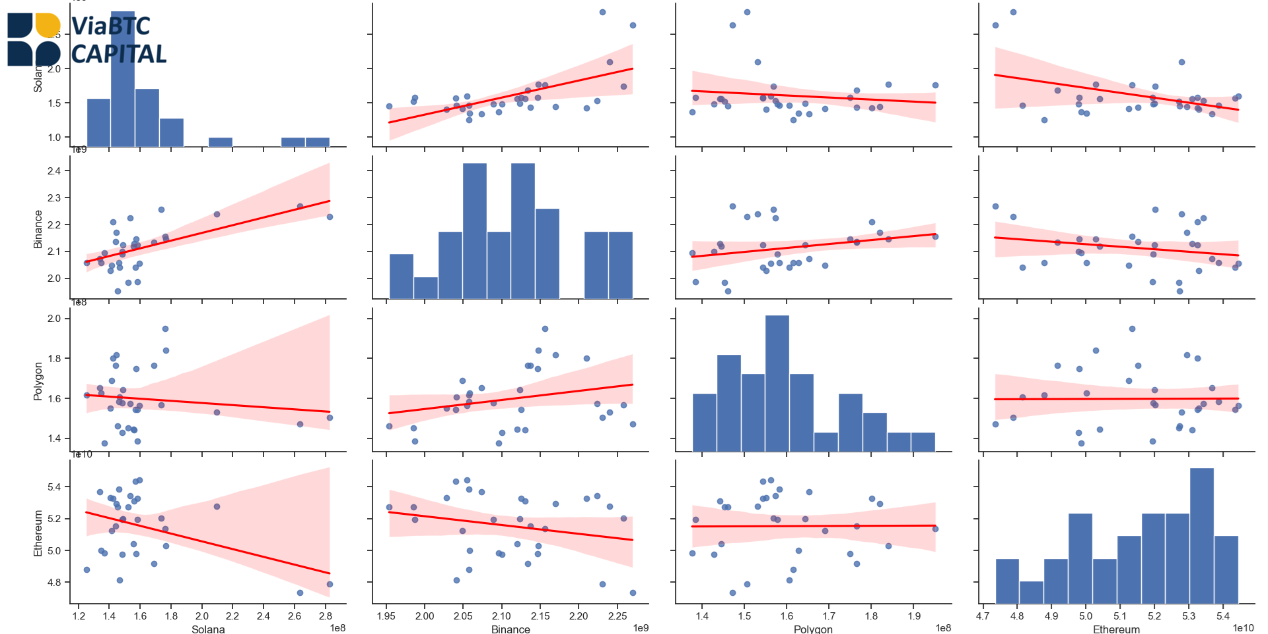 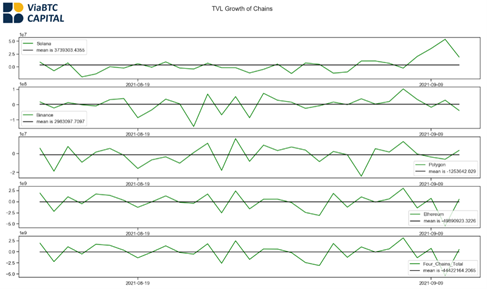 In a nutshell, the adjusted TVL allows us to eliminate the impact of certain token prices and get a clearer picture of the asset turnover and the TVL dynamics on public chains. Additionally, with such adjustments, we can develop an intuitive insight into the ecosystem development of public chains, particularly those that focus on DeFi application and invest in the native token and infrastructure of a new public chain during the early stage of asset turnover.