At the 1997 edition of the annual Worldwide Developers Conference — an event put together by iPhone-maker Apple Inc. to communicate directly with its community of developers and users — a participant asked founder and then-CEO Steve Jobs the following question:

The bitcoin (BTC) market is in a somewhat similar position. The mainstream media has published quite a handful of negative headlines. A considerable population of traditional finance folks, who can’t wrap their heads around the need and use of bitcoin, are happy to point at inconsistencies in the market to back their “I told you so” declarations about how they believe bitcoin is a farce.

Jobs replied by comparing the way the press treats new developments to how people tend to treat a child whom they saw as an infant, disregarding the fact that the child might have matured considerably since then.

In the case of bitcoin, the lag time is not only true for the press, but also for regulators and traditional finance professionals. Additionally, it appears that the crypto community is accepting and following the notion — perhaps unintentionally — by educating the public about how bitcoin and the crypto space at large are evolving. There have been scads of reports with the aim of doing just that. The latest is from Bitwise Asset Management, an American crypto asset fund manager.

Bitwise has recently prepared a 104-page white paper. In it, the fund manager argued that the bitcoin market still has inconsistencies regarding trading data, but the legitimate part of the market has a “remarkable efficiency.”

The report builds on a presentation Bitwise had made to the United States Security Exchange Commission (SEC) in March of 2018 to back up its cryptocurrency exchange-traded fund (ETF) application filing.

Here’s are the most important points, with some perspective, from the report.

As part of the research, Bitwise analyzed trading data of some 83 exchanges. Researchers said they looked at the trade size histograms, volume spike alignment and spread patterns of these exchanges. They concluded that there are only 10 exchanges with 100% real trading volumes, and these 10 exchanges collectively account for 5% of the reported trading volume. 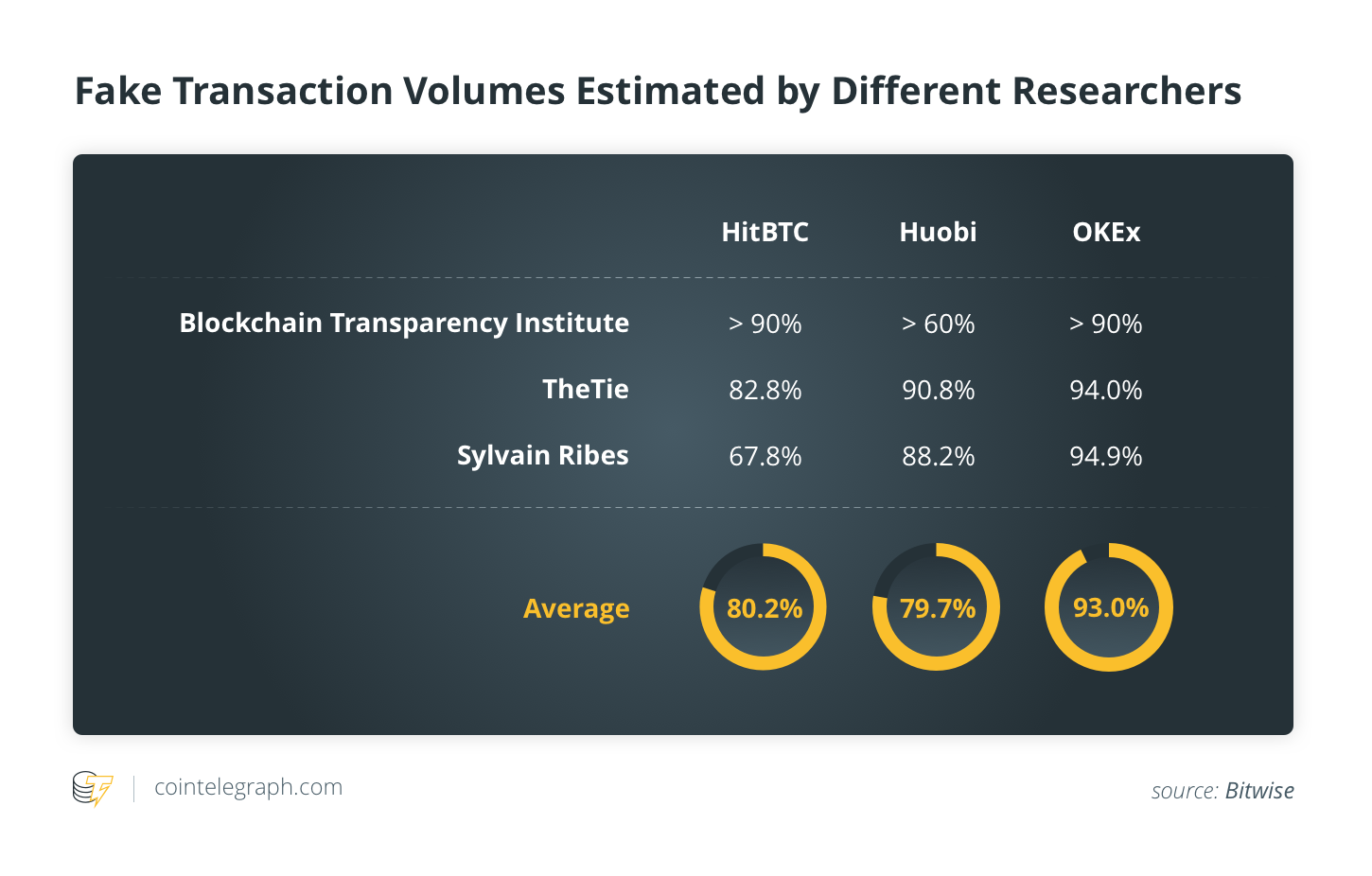 Using the data above, the average daily volume of these three exchanges would have increased the volume of legitimate trading in the Bitwise study from $554 million to $622 million. But the researchers said that it wouldn’t have materially changed their conclusion.

HitBTC published a blog post in response to Bitwise’s report in which it says it that it has a different customer profile compared to other exchanges, particularly those that the report branded as legitimate. That’s because the exchange supports algorithmic trading, whose pattern is likely to noticeably differ from human trading. HitBTC wrote:

“Different exchanges have different customer profile. HitBTC is among the first crypto exchanges to offer low-latency institutional grade (FIX) trading API. This is why the client profile of HitBTC differs from that of unmentioned but implied ‘reference exchanges’.”

Low-latency trading simply means strategies that respond to market events in milliseconds, and algorithmic trading is one of those strategies.

Bitwise did recognize the use of algorithms in crypto trading by pointing out that the average price deviation of 0.12% across its real volume exchanges is within the arbitrage band, adding that the trend “suggests that institutional-quality arbitrageurs and algorithmic programs are in place that monitor the system and identify and capitalize on any pricing discrepancies to constantly keep the prices closely together.”

OKEx, on the other hand, admitted that some traders engage in wash trading on its platform to quickly build their trading volume so they could enjoy a lower fee structure.

With six of the 10 legitimate volume exchanges in the report based in the U.S., Bitwise argues that the crypto space is more regulated than presumed. Of the 10 exchanges, only Binance isn’t a money services business (MSB), while only the four non-U.S.-based exchanges don’t possess a BitLicense, which is issued by the New York State Department of Financial Services. This level of oversight only breads transparency.

The crypto market is maturing thanks to developments since December 2017

The year 2017, marked the time when bitcoin attracted the most attention from the mainstream world, thanks to the wild bull run that saw the crypto go from just under $1,000 per BTC to nearly $20,000 by the end of the year. But, the following 12 months saw the price drop to as low as nearly $3,000 during a period that is widely regarded as the crypto winter.

Bitwise research suggests that the bitcoin market has significantly matured over the period. First of all, pointing to a downward trend in the average deviation of bitcoin’s price on its 10 reference exchanges from the consolidated price in the broader market, research claims that the quality of the bitcoin spot market has improved. 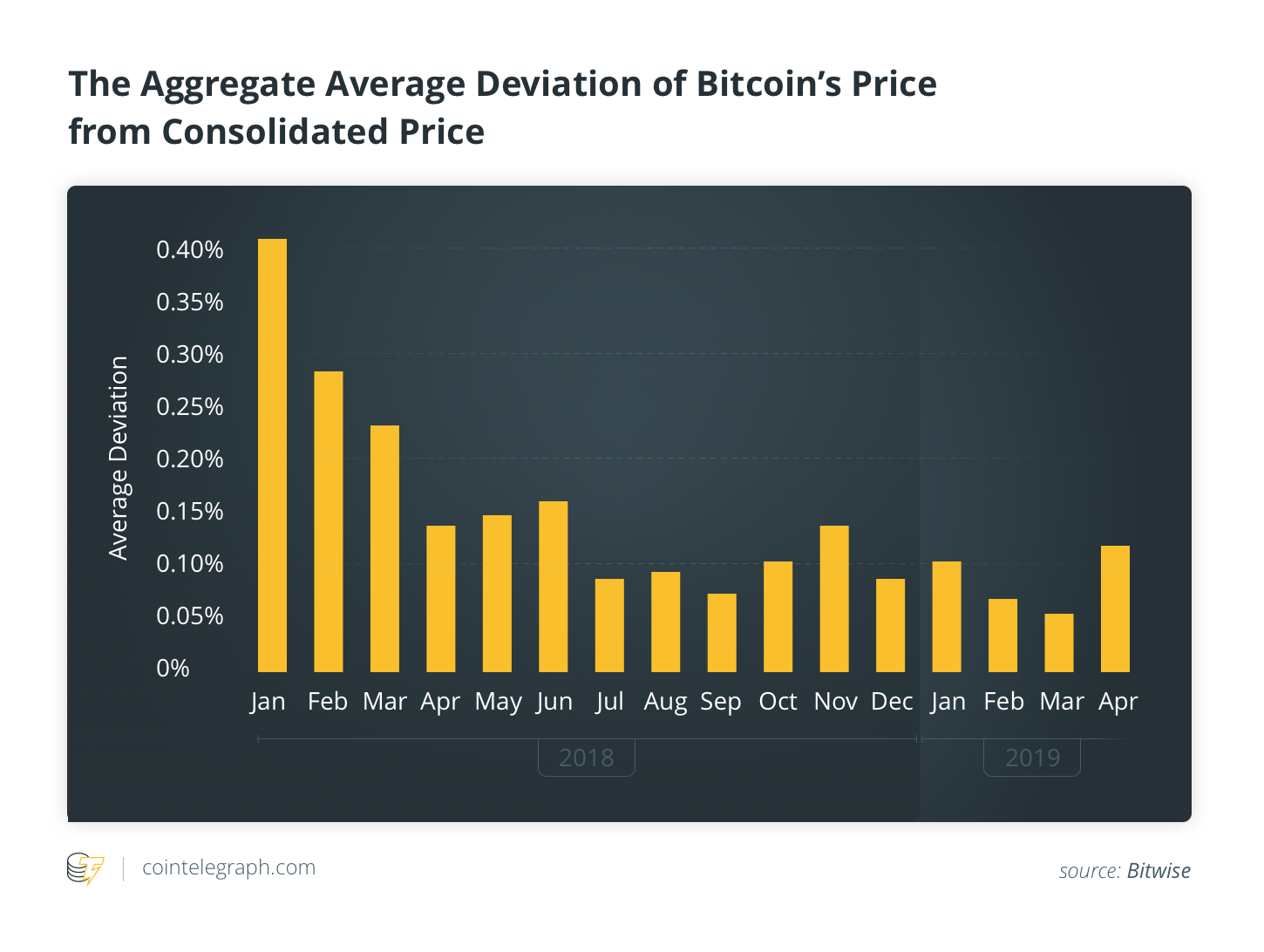 According to the chart, the price of bitcoin on the 10 exchanges deviated by as much as 0.25% to 0.4% between January and March 2018. The trend, however, levels out as of April 2018. Bitwise suggests that this trend shows the growing competitiveness of bitcoin arbitraging.

Also, the introduction of bitcoin futures in December 2017 has attracted bigger traditional market players to the crypto space and has so far made the market more organized, according to Bitwise. The cryptocurrency space has seen the entrance of one of the world’s largest asset managers, Fidelity Investments, which has built a custodianship solution.

These developments, according to Bitwise, have allowed the bitcoin market to sizeably grow in efficiency. The paper points at trends on how deviations in price are being rapidly wiped off the market as proof that institutional-grade tools are being deployed.

Bitwise is currently awaiting a decision to be made on its ETF filing with the SEC. With this report, the crypto asset manager aims to alleviate the SEC’s fears and show the commission that the market has matured to a level where it can sustain an ETF product.

When the SEC rejected an ETF application by the Winklevoss brothers last year, it expressed concerns that regulated derivatives markets such as the bitcoin futures market are small relative to the spot market. In turn, this would make it difficult to see through the unregulated, and possibly fraudulent, nature of the bitcoin market.

By showing that the spot market is significantly smaller than often reported, Bitwise pointed out that the size of the bitcoin futures market is almost as large as the bitcoin spot market. Through this, the fund manager hopes to persuade the SEC to finally ease up on its concerns regarding cryptocurrencies.