Research has shown that the number of on-chain Bitcoin transactions has risen dramatically throughout 2019, nearing the volume of Bitcoin’s peak in December 2017. Even so, transaction fees are a fraction of what they were around bitcoin’s all-time high, likely due to the continued uptick of SegWit transactions on the network.

These findings were published in the May 6 edition of digital asset publication Diar. Among other research related to DApp adoption on Ethereum, Diar found that fees rose 200 percent in April versus March. Still, fees are negligible compared to the $30 some users paid during the peak of bitcoin’s price climb at the end of 2017, and transaction times are 84 percent lower, as well.

Diar reports that this is mainly due to the growing impact of SegWit on Bitcoin’s transaction landscape. The data platform estimates that on average, the protocol is used in 35 percent of blocks and thus is “alleviating fee pressures.”

“2018 average SegWit usage was only 26% and only 11% at Bitcoin’s peak highlighting the continued adoption by major players,” it notes. 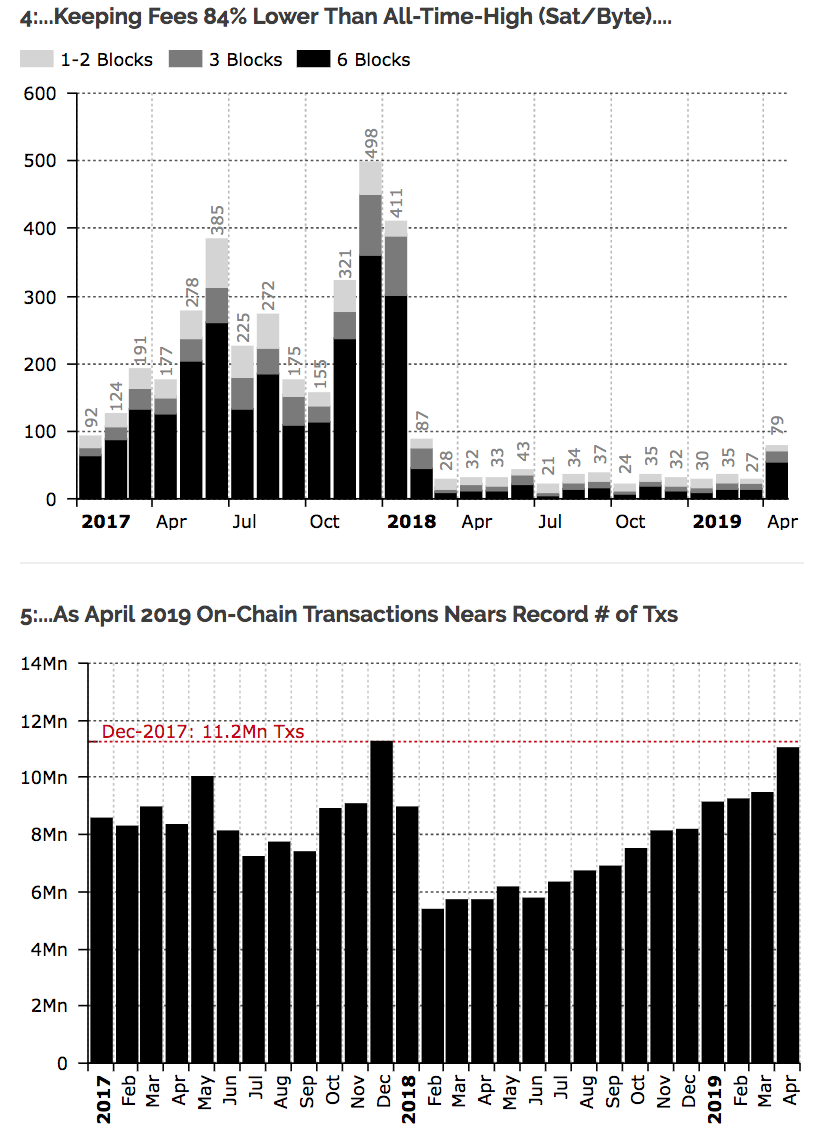 Activated in late 2017, Segregated Witness, or SegWit for short, is designed to alleviate some of the scalability concerns created by blockchain size limitations and, by extension, fees and transaction times. The protocol increases a block’s data limit by removing the need to attach signatures (the mechanism by which users prove they own the bitcoin in a transaction output without revealing a private key) to each transaction. This allows for more data to be stored in each block and an increase in transaction throughput without violating consensus rules.

By early 2018, the protocol was already taking positive effect on the falling price of on-chain Bitcoin transactions, and the industry’s major companies began to take notice. Prominent exchanges Coinbase and Bitfinex unveiled support for the protocol later in 2018, and Gemini incorporated the protocol fully in 2019.

The report also includes comprehensive data on several metrics of Bitcoin usage and growth. Although Bitcoin miner revenues are down compared to late 2017 and early 2018, for example, their current standing is a marked upswing from the past several months. In April, miners earned $13.7 million from fees and $291 million in total revenue — the highest figures to date in 2019.

Ahead of Ethereum 2.0 Launch,…

Over a Hundred 10-Year-Old Bitcoin…